Last month, I went to The Next Big Thing at Trix, a showcase night presented by Keremos. Six promising young bands on the rise populated the bill: The Galacticos, Arquettes, Steak Number Eight, Team William, Kawada and Roadburg. That much good on one night was a perfect opportunity to go and shoot some pictures. For the following three bands, I’ve been using two prime lenses: a Sigma 30mm f/1.4 and a Canon EF 100mm f/2.0.

The first band to hit the stage was The Galacticos: always in for a good show with happy rock and catchy melodies. In contrast to last time at Tank series, there was enough light at Trix to justify colour pictures. Though the excessive use of smoke made it quite difficult still. [photo series] 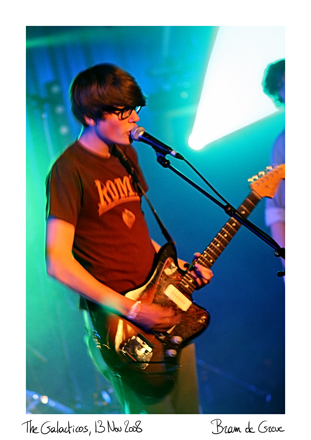 I’ve seen Arquettes playing before, but this was the first time I had my camera with. Though they played on the smaller stage with basic lights, I’m much more pleased with the results than of The Galacticos and Steak Number Eight. Is it the lack of smoke? Or the more static lighting flooding the stage? I’ve done quite a few black & white conversions as the red front lights almost always result in very ugly colour casts, even if you set your white balance at minimum colour temperature and drag down the red channel. But in some cases it was still acceptable. (photo series) 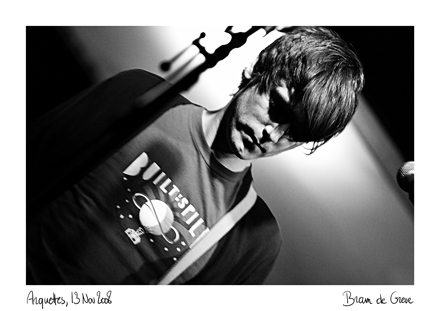 Next on the main stage was Steak Number Eight. I’ve seen them a number of times now and their slow and heavy wall of sound still impresses me. The seemingly mandatory thick cloud of smoke made it quite impossible to get the crisp shots I was after. And so I decided to play it a bit differently: desaturating the colours even further and upping the contrast, building up a grim atmosphere that fits their music. (photo series) 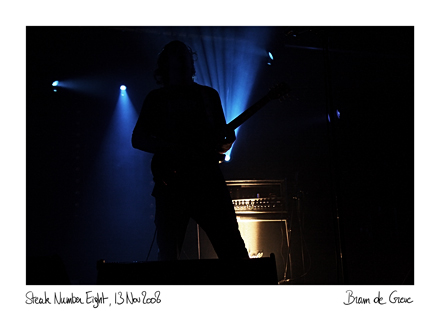 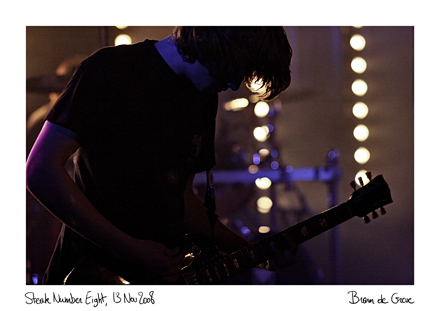 This entry was posted on Saturday, December 6th, 2008 at 6:23 am and is filed under photography. You can follow any responses to this entry through the RSS 2.0 feed. Both comments and pings are currently closed.