Two weeks ago, I reported on the first three bands that hit the stage on The Next Big Thing showcase night by Keremos. So that means you still have three more left. For these bands, I replaced the Sigma 30mm f/1.4 lens by my wide-angle zoom EF-S 17-55mm f/2.8 IS USM. Though two stops slower, it supports image stabilisation (IS) which should in theory compensate for three stops. However, with fast moving targets, that’s not always helpful in practice. On the other hand, it is a zoom giving an extra degree of freedom which is useful if you’re stuck to your position, and its glass is of excellent quality. Still, it’s hard to say which one performed best. Also, a lot of the pics are actually taken with the 100mm prime.

Team William is a funky indie pop band that mixes guitars with something that reminds me of 8-bit game consoles. It has an odd sound that I really like. They played on the small stage: no smoke and steady (mainly reddish) lights. Not perfect, but good enough for some nice shots. Some worked out better in black & white, because of the strong red colourcast. 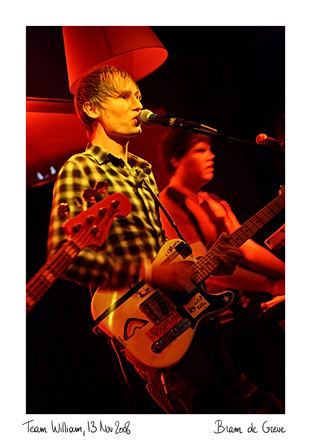 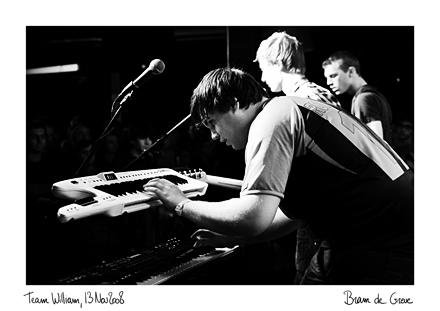 Kawada is a formation around Joeri Cnapelinckx, playing somewhat more introspective tunes. Listen to Creating a bigger boat for an easy but very enjoyable song, or Fake license for a more fun fanfare-loaded track. They were the last band to ascend the big stage, and again it proofed quite hard to get any decent pics: too dark and too much smoke. Yet, of all bands on this stage, I like their pictures most. 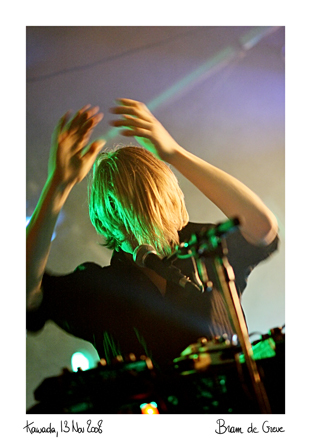 The last band of the night was Roadburg. Sharing two members with The Galacticos, they are at least as cheerful, albeit jazzier. Which is nice. An old tube radio was featured as prop and apparently it is also very handy to put your drinks on. 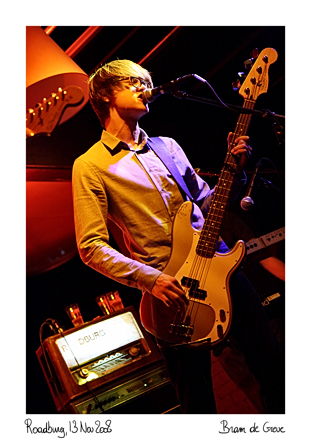 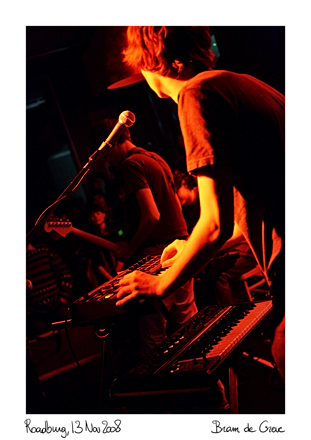 This entry was posted on Monday, December 22nd, 2008 at 11:55 am and is filed under photography. You can follow any responses to this entry through the RSS 2.0 feed. Both comments and pings are currently closed.