I’ve known Morda pretty much since the early days. Vague memories of some gigs in the Frontline, at the old location opposite to the Vooruit. Innerface, of the split album with Trust, still is one of my favourite tracks, on par with much of the Azerion album (which is just awesome, btw). Knowing their guitar player Doc and former vocalist VeganPietn from a distant past in KSA, it was inevitable that sooner or later, I would get them in front of my lens. The first opportunity was at BoscoRock festival in Kortrijk, where I’ve also shot Steak Number Eight (view series). Originally, Kudos was also going to perform on that festival, but they’ve cancelled. 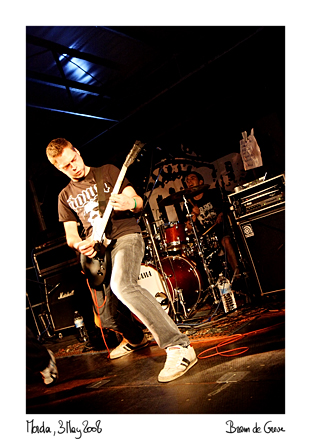 The crowd was going wild, as usual, but I had got myself a nice spot in the front pit. The lights were rather basic, there was lots of white. Because of this, I was planning to go black & white exclusively. But it turned out some of the shots still have some nice colours, some ochre with a tad of blue.

PS: many kudos to KSA Marke for retrieving my cellphone!

This entry was posted on Thursday, July 3rd, 2008 at 2:45 pm and is filed under photography. You can follow any responses to this entry through the RSS 2.0 feed. Both comments and pings are currently closed.